This past weekend at Legacy Park the KC Elite (Blue) 14U Major team brought home the championship hardware in dominant fashion. After starting the weekend in pool play on Saturday 0-2, the boys were seeded 10th and had to play the 9am game on Sunday morning, they started Sunday morning at the batting cages at 7:30am. All they did the rest of the day was reel off 4 straight victories, with 2 of those wins on Sunday coming against teams that had beat them pretty good on Saturday. The championship game didn’t even start until 7:30pm Sunday night so it definitely was a long day for the players, parents and coaches. The most impressive accomplishment is that in the 4 wins on Sunday to win the title this group of young men did not allow a single run all day,they won 13-0, 5-0, 8-0 and 8-0. Great job to the players, parents and coaching staff for a job well done. 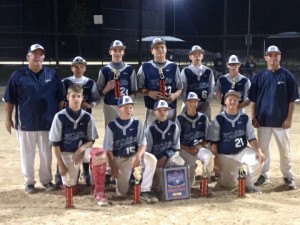